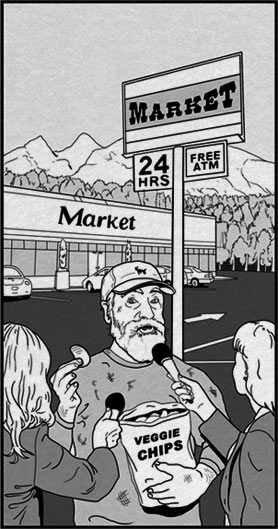 Five months ago, a veteran wilderness expert disappeared during an expedition in the Alaskan wilderness. He gave a Juneau grocery market owner quite a surprise when he walked right out of the woods into the store and immediately headed for the snack aisle. Later questioned by police, he claimed to have survived solely on the veggie snacks he had taken with him. Incidentally, he had lost his wallet in the wilderness and was arrested for shoplifting more veggie snacks.

After a string of daring bank robberies from coast to coast, the alleged “Bank Bandit” was taken into custody yesterday. Authorities credited the capture to the signature crumbs left at every crime scene. The arrested man is apparently addicted to veggies snacks, and the Authorities identified him by tracing large shipments of snacks to a suburban apartment.